A Coastal Path For England

The planned English Coastal Path promises to be the ultimate path. It will encompass exhilarating cliff-top walks, stunning shorelines, an abundance of wildlife and millions of years of the Earth’s history. Scotland enjoys good coastal access and the opening of the Wales Coastal Path this year was a big leap forward. Despite the enabling legislation in 2009, access to the English coast remains patchy and it could take several years to make the vision a reality.

How can you help? 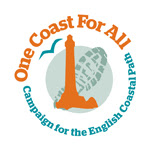 An update from my local MP

Thank you for contacting me about plans for the England Coast Path.

I understand your concerns and would like to take this opportunity to set your mind at ease. I am assured that the Government remains firmly committed to the England Coast Path project and that Ministers are continuing the programme to extend the coastal path network around the English coast. I am an avid supporter of the British countryside and I feel that the public should have as much access to coastal paths as possible; however we must remain realistic that access may be restricted in areas where properties are built on the edge of the coast or where access is restricted for other practical reasons.

The Secretary of State for Environment, Food and Rural Affairs (Defra) Owen Paterson recently gave approval for two new stretches of England’s Coast Path between Allonby and Whitehaven in Cumbria (36km), and in the North East between North Gare in Hartlepool and South Bents in Sunderland (55km).This approval follows close involvement and detailed consultation over the last two years between Natural England, local authorities, local landowners, residents and other interested organisations.

The national programme to implement the England Coast Path is extremely worthwhile – not only so more people can explore and enjoy our coastline, but for the many benefits that tourism brings to local economies in coastal areas. I am pleased that momentum is building to make this exciting project a reality.

Work is now well underway on the next sections of coast in Cumbria, Yorkshire and the North East to improve coastal access. Proposals for other regions of England are also being developed in discussion with local authorities, landowners and businesses. I am also delighted to be able to tell you that a timetable for the coast path project has now been set for the remainder of 2013 and early 2014. Details of this timetable can be found on the Natural England website by searching “coast path”.

I hope that you find this information helpful and thank you again for taking the time to write to me. Please do not hesitate to contact me if I can be of any further assistance.

Hello John,
We’ve just had some really exciting news.
For the last 15 years, the Ramblers has fought tooth and nail for a continuous coastal path around England. Until now the Isle of Wight had been left out.
Yesterday afternoon, the Government announced that it will now include the Isle of Wight in its plans for the England Coast Path.
Future generations will be able to walk uninterrupted around our stunning coastline. It’ll be simply fantastic for walkers but it’ll reap other benefits too – a massive boost for rural communities; for health and wellbeing and for fresh air and fun times.
This is a legacy we can be hugely proud of. And now it’s a legacy that Islanders and visitors to the Isle of Wight can share in too.
Thank you so much for your support.

With thanks and best wishes,
Nicky Philpott
Director of Campaigns – the Ramblers

Hello John
The England Coast Path will open up all 3000 miles of our stunning coastline for everyone to enjoy.
It will be a boost for coastal communities, our health and wellbeing, and our economy. England will be up there with the best countries in the world in which to go walking.

That’s why it’s so hard to believe that until just a few months ago, the entire project was under threat from government cutbacks.

But thanks to people like you John working with us by signing petitions, taking your local MPs for a walk and donating thousands of pounds to our campaign, the future of the England Coast Path is certain.
In September, the government announced the England Coast Path would be finished by 2020 – ten years earlier than originally planned. But we were worried that without the money to back this up, it would simply remain a pipedream.

Then on Thursday while out with the Ramblers in Cornwall, Nick Clegg announced more than £5million to back up their plan for the coast path.

Together, we’ve created a walking legacy that will be cherished for generations to come.
This is our greatest achievement in many years. We couldn’t have done it without you.
Thank you.
With best wishes,

The Marine and Coastal Access Act introduced by Labour in 2009 paved the way for the England Coast Path.

The Wales Coast path was completed in 2012 but England has lagged well behind because of hostility by landowners and cuts to the Natural England budget.

In September Ministers approved funding to complete the England Coast path by 2020, re-confirmed by Nick Clegg on a visit to the South West during last week’s Autumn Statement from the chancellor.

Hopefully Clegg’s promise will be kept – The Ramblers regard this as good news and I’m happy to pass it on to all CRC members.